I n 1901, seven years after the world’s first Art Nouveau building – Victor Horta’s Hotel Tassel – opened in Brussels, the same style of architecture made its appearance in Tbilisi. The Nobel brothers’ pavilion was unveiled at the 1901 Caucasus exhibition and decorated with sculptures by the Georgian artist Iakob Nikoladze. Although today the pavilion no longer exists, many other magnificent Art Nouveau structures still do and can be seen on streets, not only in Tbilisi but across Georgia – in Sokhumi, Gagra, Kutaisi, Batumi, Kobuleti, Chakvi, Poti, Sujuna, Didi Jikhaishi, Borjomi, Dusheti, Karsani, Gori, Telavi, Sighnaghi etc.

S o what were the distinguishing features of Art Nouveau that so inspired Georgia’s craftsmen, architects and architecture patrons? First has to be the style of exuberance and creative enthusiasm of Eclecticism, when compared with the repetition and formality of pre-existing styles. In addition Art Nouveau helped Georgia join Europe’s ‘modern’ path and aspirations. Georgia’s ambition was to become a free country with its own unique art and culture which Georgians had been denied for generations. Although Georgia remained a conquered country, this had no impact on its creative freedom. It quickly moved into step with Europe and the rest of the world. Art Nouveau helped Georgia enter into a dialogue with European countries on an equal footing, while including its own architectural vernacular. The new style was instinctively taken up by the Georgian people as greatly preferable to the old styles imposed on them. It was identified directly with freedom of choice and helped the nation break free from the conquering influence of Russia.

U nfortunately, this independence was ended by the Bolshevik invasion of 1921. After the Soviet take-over, Georgian architecture was subordinated to the totalitarian ethos of Communist Russia. However today Georgia is once again aspiring to become a fully-fledged member of the European family and its architecture is once more free to evolve with its own distinctive character. 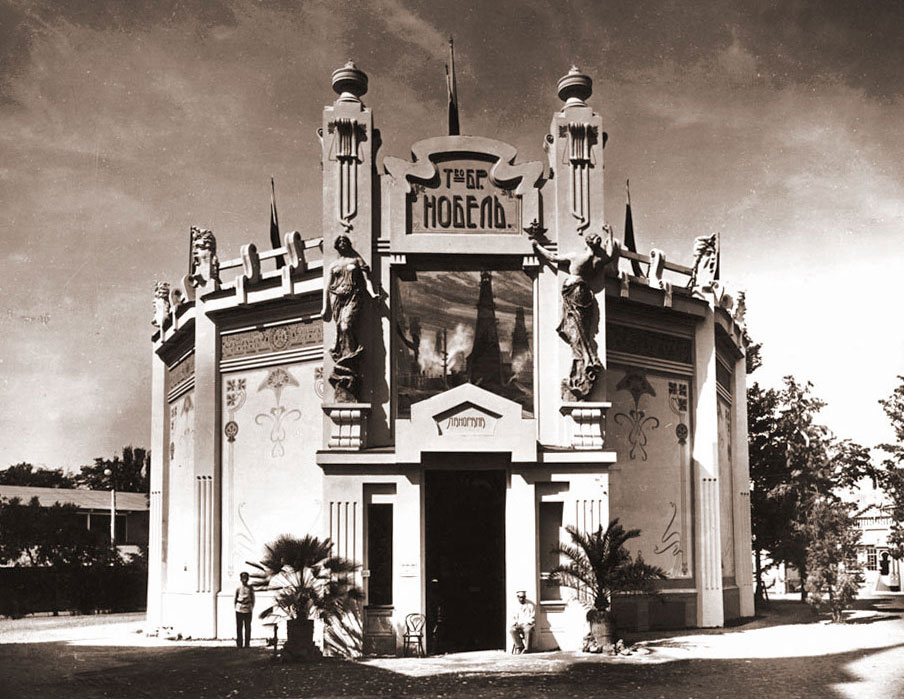 The Nobel brothers’ pavilion. The jubilee Fair of Caucasus Agriculture and Industry. Architect unknown. Decorated by I. Nikoladze. Tbilisi, 1901